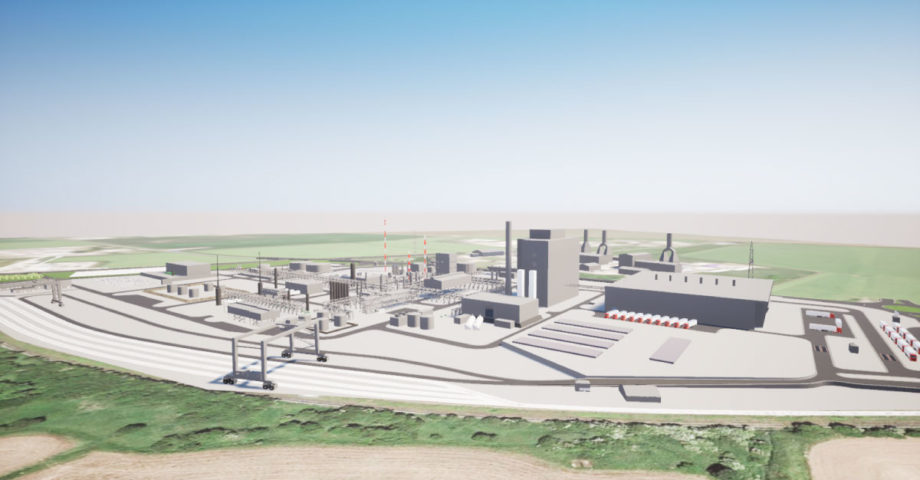 The World Economic Forum has just recently backed sustainable aviation fuel as the most promising decarbonation policy for the airline industry. With research confirming that aviation is one now of the fastest-growing sources of greenhouse gas emissions, a solution comes in the shape of the UK’s first waste-to-jet fuel plant, and for which planning consent was won by Enzygo for its client, Velocys.

“Although this was a complex planning project, for a type of plant that has never been constructed in the UK, the proposals had the overwhelming backing of the local authority as well as the residential and business community”, says Lee Searles, Enzygo’s Director of Planning.

“Most importantly, the flexible planning consent that Enzygo gained will enable the client to adjust the design of the development, as it progresses, without having to re-apply for additional consents”, added Lee.

The facility, in North East Lincolnshire, will be the first of its kind in Europe, and will process around 600,000 tonnes of household and commercial residual waste into low-carbon aviation and road transport fuel. This fuel produces approximately 70% less greenhouse gas emissions per tonne compared to conventional fuel, as well as a 90% reduction in soot and particulate matter from aircraft engine exhausts and almost a 100% reduction in sulphur dioxides.

The development is a direct response to the Government’s Renewable Transport Fuel Obligation (RTFO), which is one of Westminster’s main policies for reducing greenhouse gas (GFG) emissions associated with travel. In addition, the development has achieved Stage 1 funding as part of the Future Fuels for Flight and Freight Competition (F4C), run by the Department for Transport.

The site is expected to create 130 permanent skilled jobs and many more during construction, which aims to begin in 2022, subject to additional funding, with the facility potentially operational by 2025.

The Urgent Need for Change

The North East Lincolnshire area has long been associated with the petrochemical industry. In line with the UK’s government’s plans to decarbonise the economy, the local authority has been actively looking to replace fossil fuel industries with more sustainable forms of energy production.

This coincided with the Department for Transport’s Renewable Transport Fuel Obligation (RTFO) Guidance which confirmed in April 2018 that, for the first time, renewable fuel used in aviation in the UK would be eligible for award under the RTFO Order.

Emissions from aviation currently account for about 3% of the EU’s total greenhouse gas emissions. By 2020 global international aviation emissions are projected to be around 70% higher than in 2005, and forecasts suggested that by 2050 they could grow by a further 300%-700%. Urgent action is therefore needed to address the emissions associated with the aviation sector, and this development will play an important role in contributing to this. By providing a portion of road fuel, the development will also contribute to the ongoing efforts to decarbonise the road transport sector.

A catalyst for change

Having identified a potential site in North East Lincolnshire, Altalto Immingham, a subsidiary of Velocys, put the project out to tender in December 2018. Despite heavy competition from much larger firms, Enzygo successfully won the bid. A major contributory factor was Enzygo’s wealth of experience in the renewables sector including, more recently, using its multi-disciplinary skills to secure planning consent for a comparable waste-to-low-carbon-fuel plant in North Cheshire.

Although site lies within an Enterprise Zone, with an indicative use for ‘renewable energy’, it is also predominantly greenfield with some areas of hardstanding/ gravel.  Furthermore, the site lies close to the Humber Estuary, the largest coastal plain estuary on the east coast of Britain through which many rivers and tributaries flow, including the Aire, Derwent, Don, Ouse, Trent and Wharf.

The Humber also supports a rich variety of habitats and species and is recognised as one of the most important estuaries in Europe for overwintering birds and, as such, it has been given a number of nature conservation designations under UK, European and International law. The start of the planning application process therefore required Enzygo to conduct a wide scope of environmental impact assessments.

In agreement with the local authority, Enzygo performed a number of technical assessments, including preliminary risk, preliminary ecological, landscape and visual impact, transport and transportation, air quality, flood risk and drainage, noise, heritage and socio-economic impacts. These were carried out in context of the nature of the development, the characteristics of the proposed site, and in consideration of the review of national and local planning policies.

One of the major considerations for the project was the impact of road transportation, particularly during the construction phase. The site, however, already benefits from an existing access road and a further access road will be built for staff vehicles.  Furthermore, construction of the new Humber Link Road has now been opened and will further improve the accessibility of the site.

Overall, the report concludes that the traffic increases associated with the operation of the proposed development have been assessed to be negligible. However, a Travel Plan has also been submitted as part of the planning application setting out measures that aim to reduce staff car use by promoting the use of public transport and more sustainable travel.

Another key consideration was the impact to ecology and habitat. The Planning Report did identify the need for further assessment, which was duly undertaken in the form of a Habitats Impact Assessment. This work, combined with the recommended mitigation measures will result in no significant residential impact. In addition, the development will provide opportunities for ‘biodiversity net gain’, in accordance with planning policy. The development will also contribute a significant fund of money that will be used not only to support ecology and habitat but to also fund measures including cycle routes and sustainable urban drainage.

Although the site lies mainly on greenfield, it is located within an area with a significant number of planning applications, including two further energy from waste facilities. Furthermore, a previous application for a large-scale fuel-production facility on the site was granted and, although this consent was not implemented and has now expired, it has established the principle that the proposed waste-to-fuel application can be accommodated.

Velocys’ waste-to-aviation-fuel plant will be the first of its kind in both the UK and Europe. Its aim is to support the UK’s government’s Renewable Transport Fuel Obligation (RTFO), which is one of its main policies for reducing greenhouse gas (GFG) emissions associated with travel. As such the benefits will be significant, both in terms of the environment and quality of life for those communities living close to airports and airpaths. These include:

While this is a first-of-its kind plant, the technologies it will employ, however, are already well proven and established. What hasn’t been done before is the combination of these technologies to produce aviation and road transport fuel from waste. 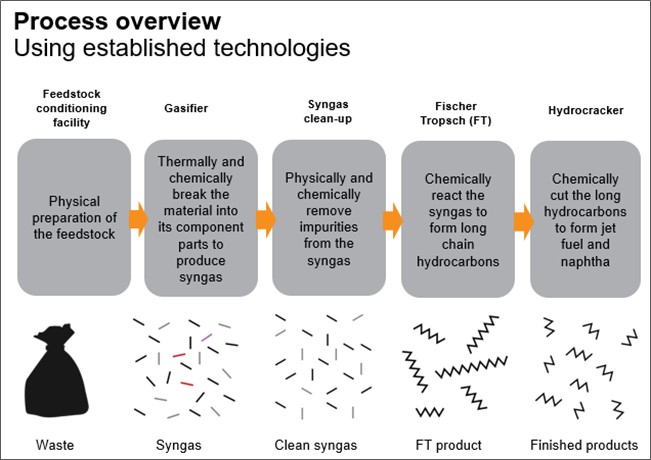 The solid waste, amounting to around 1,650 tonnes per day, will be delivered to the facility by road, and potentially by rail in the future. The feedstock will be weighed prior to unloading into the waste storage area. The solid waste feedstock will be processed within the Feed Conditioning Facility (FCF), to remove oversized items, some plastics, metals and other inert items to create a conditioned Solid Recovered Fuel (SRF). This material will then be shredded, sized and dried.

The material is then fed into the steam reforming gasification unit which can convert approximately 1,030 tonnes of SRF per day into syngas with a high concentration of hydrogen and carbon monoxide. The Syngas is cooled and transferred to the gas clean-up stage to remove impurities.

The Syngas then goes through the Fischer-Tropsch (FT) Synthesis process which will convert it into the primary hydrocarbon liquids, which are used to produce the liquid products.

Following this, The FT Liquid Upgrading Unit will produce high quality naphtha – for road transport use – and Synthetic Paraffinic Kerosene (SPK) – for use in aviation. They are then converted to finished products and exported from site by tanker.

Planning applications for the development were formally submitted to North East Lincolnshire Council (NELC) in July 2019. What followed was a year of ongoing communication between Enzygo, the developers and the council as well consultation with the local business and residential community.

At the NELC Planning Committee in May 2020, full planning consent was given with no major objections.

In giving its reasoning for the consent NELC said that the proposal would not harm the area character or local amenity, nor would it have significant impact on ecology.  Furthermore, it said that the development is acceptable under all other planning considerations, including highway safety. Overall it said the proposal will support the economic development of the area.

Although construction is not due to begin until next year, the planning consent will allow early-stage work to proceed under ground level. Also baked into the consent is the flexibility to amend plans, within agreed limits, since this development is the first of its kind in the UK.

Additional funding will still be required to get to full construction stage but this was given a boost in March 2021 when the UK government launched a £15 million competition to develop UK facilities which convert household waste into aircraft fuel. The ‘Green Fuel, Green Skies’ project is part of Boris Johnson’s 10-point plan for a green industrial revolution and has been warmly welcomed by Velocys.