How can we provide Britain’s final resting places?

Within the next 100 years, almost all of the UK’s current 66.5 million population will die; many more people will be born and live out their lives in the same period.

But when it comes to planning the picture is not linear. The UK’s growing population is living longer, postponing an inevitable problem. Burial and cremation are still the most common forms of disposal. Technology is also beginning to develop new low-carbon, low-waste options that may be acceptable to some faiths but not others.

In the short-term there are more immediate solutions. One is the re-use of existing graves not just for family members but also ‘strangers’, a practice already common in parts of southern Europe and Asia. There is as yet no national policy on this and many people understandably feel revering the dead is more difficult.

However, we are not the first generation to approach this problem with sensitivity, as I would like to explain to put our present dilemma into a wider context. I would also like to outline a more modern response to a very different 21st century parameters.

Learning from yesterday and improving on the past

The Victorians invested heavily in a complex network of quite revolutionary urban, sub-urban and rural cemeteries developed in careful sympathy with the beliefs and feelings of the period.

Today’s position is even more complex and we need to make a very clear planning, social and environmental case that respects both modern emotional needs and intense local land use pressures.

As an example, Enzygo was able to help resolve planning issues that resulted in permission being granted to develop the 10,000-burial plot Harold Wood Muslim Garden of Peace that will preserve the tranquillity of green belt land at Hainault in the London Borough of Redbridge. 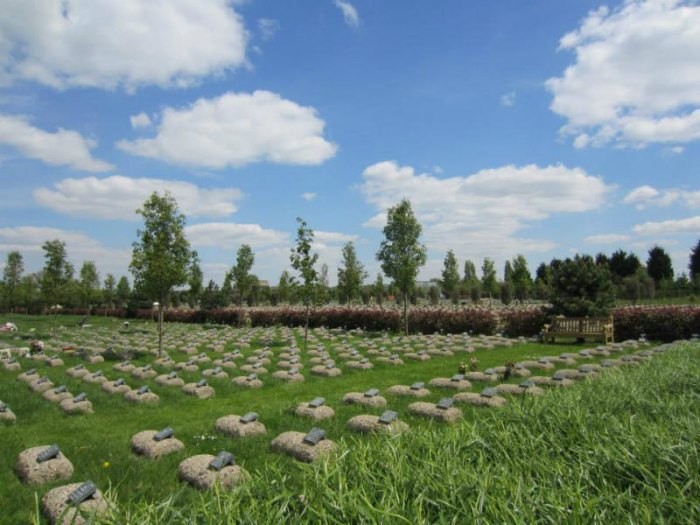 We are also very pleased to have provided a comprehensive analysis and planning strategy for Harborough District Council (HDC) in south east Leicestershire that I hope will be a useful template for other local authorities.

This work has actually been short-listed for the 2018 Planning Awards in London on 6th June run by Planning magazine in conjunction with PlanningResource and PlacemakingResource.

Burials and internment of crematorium ashes are still the most common form of committal – many people also scatter ashes legally within the wider environment. But there could soon be other options.

The US Cryonics Institute in Michigan has also signed up some 2,000 living people to the idea of freezing and carefully storing their bodies after legal death in case future medical science can restore them back to healthy life. The Brain Preservation Foundation hopes that advances in lowering body temperatures during heart and brain surgery can be taken to an ultimate conclusion.

Meanwhile, for the living digital modelling is transforming medical education. However, The Times reported in March 2018 a surge in people donating their bodies to meet the need for cadavers in surgical training; 1,344 bodies were accepted in 2017 for anatomical study, dissection and surgical practice. The Human Tissue Authority regulates and licences 28 UK medical schools. Under the Human Tissue Act 2004 written and witnessed consent must be given by the donor before death.

There are local conditions and caveats. But because medical schools usually arrange for final cremation, the disposal of ashes is still necessary. A record 1,575 people also donated organs in 2017, an 11% increase over 2016 and the highest for 28 years.

None of above are likely to affect the overall numbers significantly. However, medical science has extended longevity by some 30% in a century – average life-expectancy in England for men is now 79 and 83 for women. But the major causes of fatality have changed. Death from infectious diseases was fairly unpredictable. Now genomic medical treatment tailored to individuals could be possible. Dementia is the most common cause of death in England and Wales.

Globally, the World Health Organisation (WHO) estimates that annual deaths between 2015 and 2030 will rise from 56 million to 70 million largely due to non-communicable diseases such as heart complaints and cancer, with corresponding medical and palliative care needs.

These subtleties did not apply to 19th century London. By the 1850s, inner-city graveyards and cemeteries were in an appalling state with gravediggers contracting typhus and small pox from corpses.

Body-snatchers Burke and Hare were found guilty in 1828 of 16 murders to provide bodies for anatomical dissection. But ‘grave robbing’ by the ‘resurrection men’ was driven by a shortage of space. Fresh graves were broken into while new ones were dug; corpses were dismembered to make room for more. Finally, the cholera epidemic of 1848 killed 60,000 people.

The Burial Act of the early 1850s banned most burials within the then city limits. Number 121 Westminster Bridge Road is an unremarkable façade today. In 1854 it was an entrance to the London Necropolis Railway that ferried both mourners and corpses to the new Brookwood Cemetery in Surrey – one of a seven new cemetery sites built to cope with the capital’s needs. 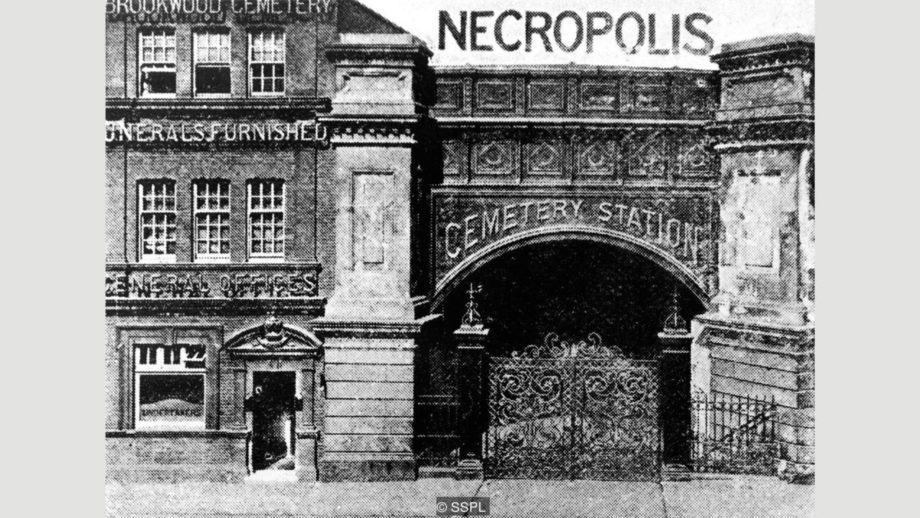 Another part of the solution was Kensal Green cemetery in the Borough of Kensington and Chelsea which opened in 1833 with fashionable monumental masonry, large mausoleums and 72 acres of green space. G K Chesterton in his well-humoured 1913 poem “The Rolling English Road” refers to Kensal Green as “… the decent inn of death”; Sherriff of Nottingham actor, Alan Rickman, was laid to rest there in 2016, followed by Christine Keeler in 2017.

HDC is a modern mainly rural local authority. To meet its land use commitments, it asked Enzygo to create the Harborough District Cemetery and Burial Strategy which informs the Council’s Local Development Framework, Local Plan and response to growth needs.

Our methodology was to survey the provision and remaining capacity of individual parishes within HDC by talking to parish councils, vicars and church wardens and through desk studies. We also considered the unparished town of Market Harborough. The result was a series of local micro solutions that also revealed macro-level shortfalls a comprehensive planning strategy must resolve.

In the HDC strategy, Enzygo identified: –

The legal framework and multi-faith profile are also interesting.

Religious groups differ in after death requirements which can impact significantly on burial/crematorium ash spaces needs. People in HDC identify themselves as Christian, Buddhist, Hindu, Jewish, Muslim, Sikh and other religious traditions; a national 2017 survey by the National Centre for Social Research also found that nationally 53% of adults claim no religious affiliation.

The name of the Leicestershire village of Fleckney, and its near neighbours Arnesby, Shearsby and Bruntingthorpe, reflect the area’s old Viking roots on the Danelaw border with Anglo Saxon England. It was listed in the Domesday book as a hamlet with three inhabitants.

Today, the modern village with a contemporary population of circa 4,894, based on 2011 census figures, lying 8 miles south-east of Leicester, 7 miles north of Market Harborough and close to the M1 is typical of commuter-country England. The parish falls with Harborough district. HDC’s population was 87,200 in 2015 and is expected to rise to 102,279 by 2039, outstripping the mortality rate.

If we take Fleckney as a mini-case study, its church of St Nicholas built after the Conquest has a fine Norman door arch but also a closed churchyard with some 60 remaining burials and 60 cremation ash spaces. However, between 2016 and 2039, some 273 burial spaces will be needed. Similarly, circa 249 ash spaces will be required up to 2039. These currently can’t be provided.

Though parishes differ, they generally have five solution options: –

In rural Fleckney’s case, the number of spaces needed is too large for intensification but talks are underway about an adjacent extension. Each parish requires an individual solution.

Meanwhile, urban Market Harborough with a population of 22,911 based on 2011 figures is served by a cemetery that is hemmed in by a road to the east, allotments, parking, building to the north, playing fields to the west and a leisure centre to the south. A small extension with 400 spaces is possible to the south. But taking over the sports field and allotments could be controversial and lose community amenities.

Therefore, another solution is needed. But all developments must meet the criteria of not preventing other economic benefits from being achieved and contribute to creating a ‘… high-quality built environment…’

Where new cemetery sites are identified, they must be considered against a full range of planning criteria, including site size, accessibility, landscape impacts, heritage impacts and availability. However, we found no reason why the needs of all religious minorities cannot be accommodated.

Should we be optimistic. Well yes, according to Chesterton. In his 1913 poem explaining how “The rolling English drunkard made the rolling English road” he concludes: – “For there is good news yet to hear and fine things to be seen, Before we go to Paradise by way of Kensal Green.”

Do please contact me for more information. All discussions are confidential.