Rail’s new renaissance is the exact opposite of Dr Beeching’s infamous 1963 network cuts, plus the tarmac-laying motorway revolution of the 1960s. Low-carbon UK train travel is now in; fossil-fuel powered road transport is very definitely on its way out.

This is good in terms of UK CO2 reduction and, crucially, air quality improvement targets. But it does leave another environmental threat hanging quite literally over rail’s revival – heavy rain.

Tracks and flooding are often a worse combination than roads and floods. Particularly where it is essential to maintain services through known flood zones for community and business reasons.
Why? Roads and rails share underlying similarities. But they are also very different. Both are built on impermeable sub-surfaces topped with gravel. While you can opt to change route at every road junction, inflexible rail tracks have to be ultra-reliable.

Which is why I do foresee serious problems where modern railways and climate change meet head on!

There is a risk to trackside points and signalling equipment that depends on intricate wiring and power supplies. Ballast is easily washed away. Debris blocks drains. 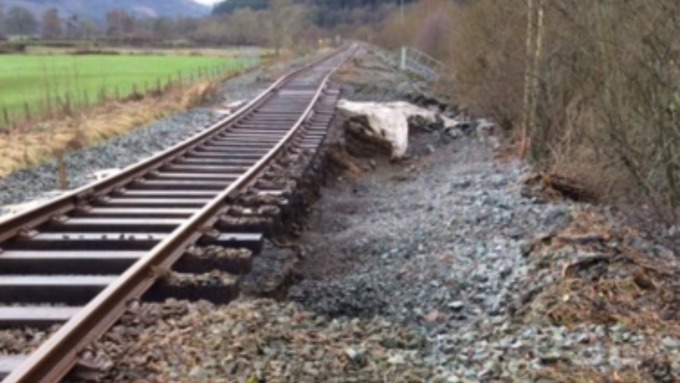 However, I also see a very practical solution. I think an extension of SUDS (sustainable drainage system) offers rail benign, easy-to-construct, easy-to-manage and cost-effective natural alternatives, as I would like to explain here.

A lot of track laying in the pipeline

Fortunately, this is a very opportune moment to look at SUDS for railways because in the next few years hundreds of miles of track are going to be laid or re-laid in Britain.

For example, in November 2017, Transport Secretary Chris Grayling unveiled a strategic revamp of the UK’s rail system. In parallel, HS2 is still on track … if I can be forgiven the pun. Meanwhile, strategic upgrades for England’s northern TransPennine route were announced in January 2018 – the so-called HS3. The south of England will benefit from similar east-west projects.

In addition, the Government’s plan includes a proposal to reopen some legacy lines from the Beeching cuts around Bristol, Birmingham, Exeter and the Northeast. The Department for Transport also hopes to shorten peak journey times between London and Sheffield not through electrification, which is says would cost £1 billion and only save one minute, but by straightening sections of track to save up to 20 minutes.

Enzygo were responsible for the flood modelling works which enabled the Old Sodbury Aqueduct to be raised in order to allow the electrification of the Bristol Line. Here we realigned the river and demonstrated that this would not increase flooding downstream whilst protecting and enhancing the ecological value of the realigned river route. 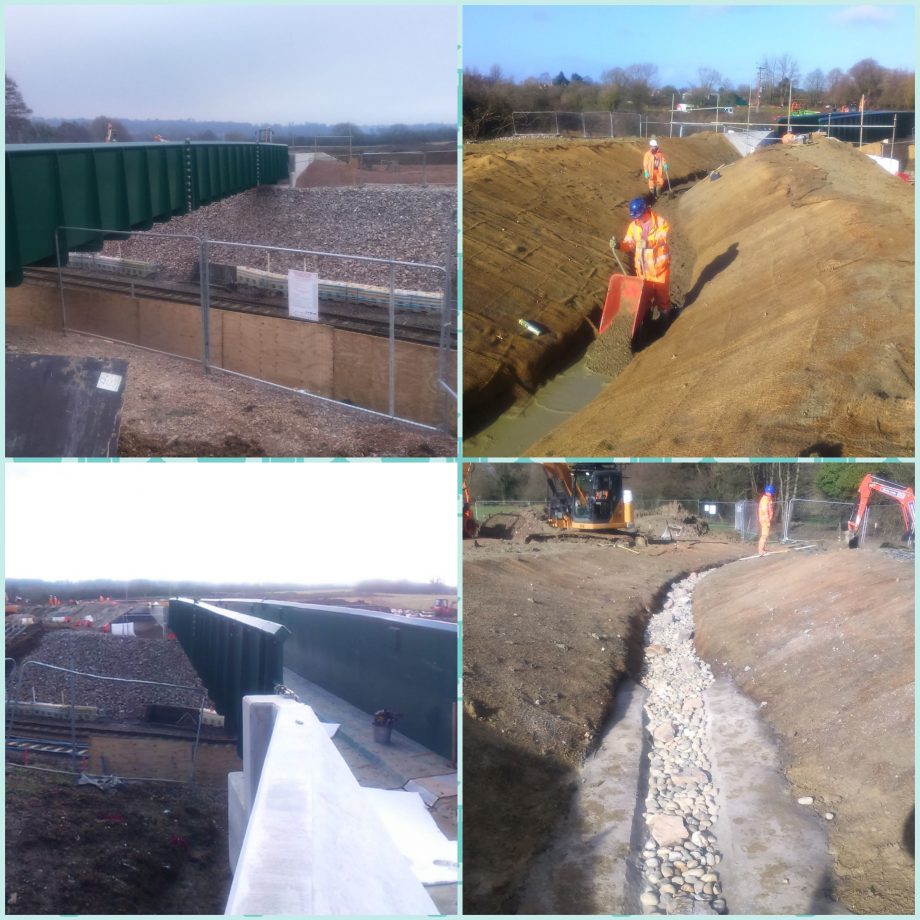 Removing curves is vital for new 125mph hybrid/bi-mode trains to run faster. Like hybrid cars, they can use electricity, diesel, batteries or hydrogen, switching seamlessly between different technologies.

“A stich in line saves nine”

With HS2 added, it means that the UK is going to be laying a lot of new track, upgrading existing track, recovering and replacing old lost track and straightening high-speed track.

Which is a perfect opportunity to head off flooding problems before they occur. And occur they do, leading to cancellations, disrupted journeys and very unhappy customers. 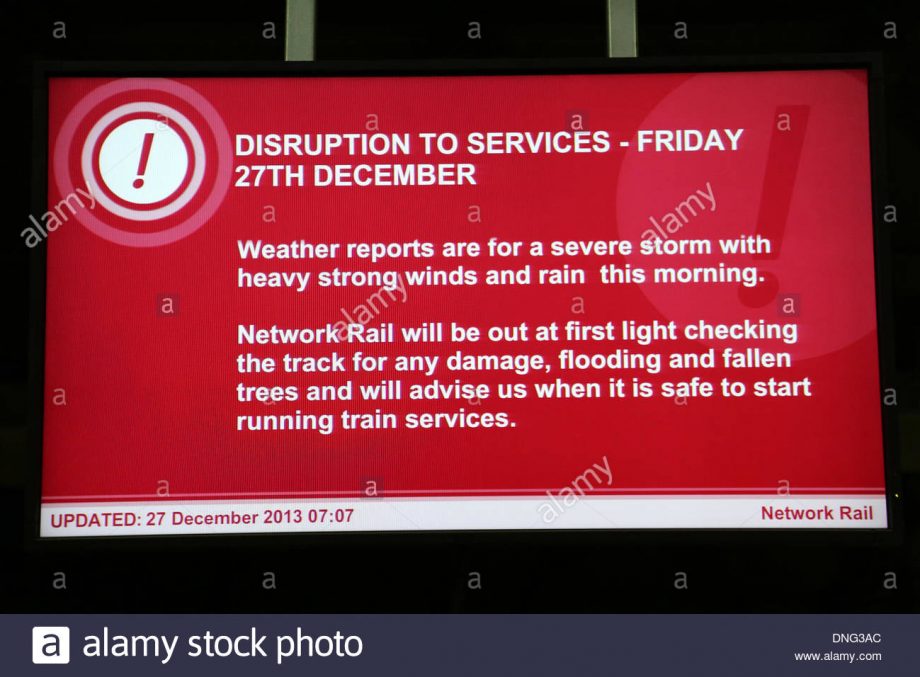 Fluvial surface water flows are a major culprit. Created by river or coastal flooding, it is easy to under-estimate the damage they can cause to track foundations.

Stormy seas in 2014 hammered Brunel’s famous 1847 Dawlish coastal line in Devon, washing away track foundations that had an estimated £1.2 billion economic impact before the line was rebuilt and reopened two months later. Incidentally, I do recommend watching the fascinating time-lapse footage!

Although the damage wasn’t fluvial flood-related, it does highlight the need for resilience. Again, for example, we may need to protect key railway electrical substations in the same way that we learned to protect local grid installations after the 2007 Tewkesbury floods.

During January 2018, Storm Fionn closed lines in East Anglia when fallen trees blocking tracks. This again shows the vulnerability of vital rail links. Main line services to Norwich were closed for a day. Lines were also blocked between Stowmarket and Norwich, and Ipswich and Colchester.

So, yes, the effects can be extremely real. Network Rail’s Orange Team does a magnificent 24-hour repair job. But easy prevention is better than costly cure.

SUDS is an obvious solution for rail that I think will give drainage engineers another important tool.

The idea is to replicate the drainage patterns of natural systems at source in ways that are easy to manage, need no artificial energy, are intrinsically robust and resilient, but also attractive and environmentally sound.

How they work best for rail networks is being researched in depth. Innovations in hydrological and environmental process modelling at the University of Leeds are optimising the design of railway drainage systems so that SUDS can be fitted retrospectively to vulnerable stretches of the network.

SUDS, or SuDS, was developed originally to stop surface flows from one property or development affecting neighbouring properties/development in urban environments. It is now used commonly for rural problems.

In natural environments, the ground is generally permeable and absorbs surface water in a process called through infiltration.

But when surfaces are sealed off by buildings, infrastructure, hard-standing, roadways, and now railways, we have to use manmade pipes and culverts to divert flows into local watercourses. These then raise river levels, cause downstream flooding and lower water quality. Overflowing foul sewers add to the problem.

Sustainable drainage systems reduce these surface flow rates. They also clean water which is then either stored temporarily before being returned gradually to the ground/watercourse, or used for irrigation. Storage is often by means of ditches known as swales, filter trenches, retention ponds and basins.

These often take the form of shallow vegetated landscape depressions that have to be water-free for most of the time so that they can store runoff. Similar depressions with taller shrubs and planting are often called rain garden. Bio-retentive basins are again similar depressions filled with gravel/sand filtration layers beneath a growing medium. Wet lands and reed beds are also used.

Infiltration basins and soakaways then reintroduce water into aquifers and groundwater.

Developing trackside SUDS systems for vulnerable runs of rail is not something that can be left to chance. The work at Leeds is developing a methodology for simulating the hydrological behaviour of rail systems so that their impacts can be assessed against a series of sustainable drainage options.

Because historical data is often not available for calibrating and validating modelling, the research includes gathering hydrological data from site monitoring. In the interim, 30-year UK climate change data from the best available climate model projections is used for the testing methodology.

The project quotes Network Rail’s figures that 44.5km of drainage were renewed in 2013/14 at a cost of more than £20 million. The potential cost of flooding could be far higher. In 2012/13, 32 Western Route Region flooding incidents alone delayed trains by 145.4 hours. More than 1,500 waterlogged rail foundations were also reported each year from 2009 to 2012, with lost time, settlement and derailment risks.

At Enzygo we generate Surface Water Management Plans and SUDS schemes where attenuation rates and scheme sizes are set by industry standard software. Runoff is calculated as accurately as possible to minimise storage requirements. Retrofitting existing drainage is a key part of our service.

Although SUDS for rail comes with a cost, the payback in terms of uninterrupted transport links whatever the future weather could be much higher when the size of new rail investments is considered.

Plans to transform England’s northern Pennine routes, known as Northern Powerhouse Rail, are part of a 30-year road/rail upgrade programme initiated by Transport for the North (TfN) at a cost of £70 billion.

This should in-part mirror the south’s Crossrail and Thameslink east-west links. Among many other developments for the Home Counties and southwest, South Eastern will see longer trains with at least 40,000 extra seats for rush hour passengers.

Although ex-deputy prime minister John Prescott’s has labelled the Northern Powerhouse Rail proposal a “fraud” because financial decision-making will stay in Whitehall, the projections of 850,000 new jobs that could boost the economy by £100 billion must be taken seriously.

TfN, which is set to become England’s first sub-national transport body in April 2018, says 1.3 million people will be put within a dependable hour’s train travel of at least four major northern cities. Some 39% of the region’s businesses will find themselves within 90-minutes of the same four and other northern urban centres.

Britain’s rail system has a long and often unsuccessful history. A 19th century boom saw railway-building mania, duplicated routes, tragic accidents, over-capacity, plus fortunes made and lost.
The network’s efficiency in WWI guaranteed the flow of men and war materials from across the county to the Western Front. After WWII, a lack of investment saw hundreds of routes make a loss. Dr Richard Beeching’s axe cut 2,128 stations, 67,000 jobs and 8,000km of track on 27 March 1963.

Since then, more than 1,500,000 additional trains have run each year and passenger demand has doubled, according to Chris Grayling. Describing Network Rail as “one big central blob”, he told the Commons recently that “The system is creaking – It’s bursting at the seams.”

Along with the reorganisation, new services are planned. One is the reopening of the famous Varsity Line along Britain’s “Silicon Valley” between Oxford and Cambridge, starting interestingly at Bletchley Park, home of the WWII enigmatic code-breaking research centre. A new East West Railway Company was formed in December 2017 to facilitate this.

The Varsity Line concept is to help generate new employment and encourage house-building via “this corridor as a world-class centre for innovation, technology and high-skilled jobs.” There will also be connections to four main line routes coming out of London. It is in effect a business model.

Crucially, the line is being designed to incorporate future upgrades with as little disruption as possible!

If you feel more information on SUDS and flooding would be helpful, please contact me.