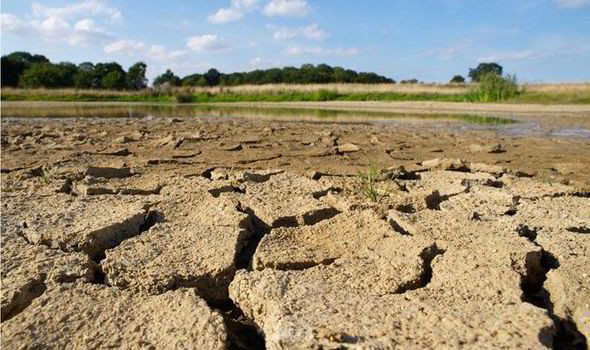 Water, water… but not everywhere

You planned for flooding. But are water shortages on the heels of terrible spring weather too difficult to cope with? Freezing ‘Beast from the East’ temperatures lasted until March followed by a heatwave in May. Is this a one-off crisis or an opportunity, and will we see it again?

With the prospect of drought now a real risk, I think this is an opportunity for developers, landowners, companies and local authorities to solve several problems at once. Not least because of a demand for verification that SuDS (sustainable drainage systems) meet the high-quality standards needed for water to be returned to important groundwater aquifers. However, without fundamental changes in our behaviour, we will soon face a crisis.

When cold-fronts from Siberia and Atlantic rainstorms clash to give us extreme winter weather, they also hide the dangerous truth that we are running out of water. Closing the mismatch between winter rainfall and our high summer consumption is vital to sustainable surface and groundwater management. 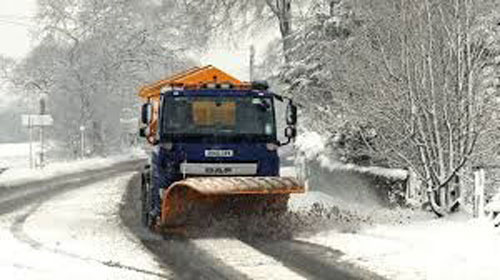 Fortunately, many issues can be tackled locally, using all-season hydrological survey data to understand what is happening both above and below ground. Planning for floods on sunny days and water shortages on wet days may feel strange. But comprehensive data can help to reveal the real size and scope of our challenges and solutions.

For example, on a personal level, householders will increasingly be asked to recycle ‘grey’ bath and washing machine water; instead of using water butts gardeners will build ‘rain gardens’ with runoff into wet areas – a domestic small-scale version of SuDS, as I explain later. The English ‘billiard-table’ lawns will gradually give way to more drought-resistant plants.

The Environment Agency (EA) also wants to lower our personal daily clean water use to below the current 140 litres average and warns that the continued loss of 3 billion litres annually could lead to water shortages in the south east quite soon. A leaking tap can waste 300 litres a year. 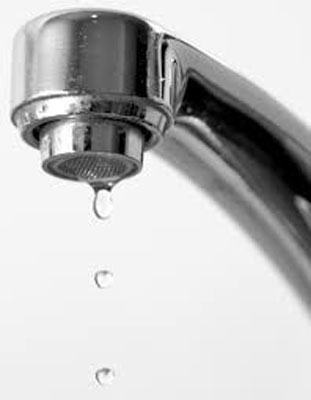 To further understand the scale of our water problem, the EA recently commissioned a report called “The State of the Environment; Water Resources”, as the first major study of England’s water resources. It found that in 2016 some 9,500 billion litres were taken from lakes, rivers, reservoirs and subterranean sources. A further 1,100 billion litres were lost through infrastructure water leaks. Current levels of abstraction are unsustainable. Which is why sustainable groundwater management is important.

If you manage a golf course, leisure park, urban housing development or factory, your flood planning priority will be to protect people, property and valuable equipment in extreme wet weather. But floodwater can also be conserved. Impounding flood water in new ponds is one solution, but in the UK building sluices, weirs and dams will need a licence. One company I have in mind went further, collecting a legally-permitted (unlicensed) 20m3 daily abstraction of on-site groundwater in underground tanks in winter ready for industrial process use during the summer when surface supplies are limited.

There will also be a high-level push to reduce widespread nitrate fertiliser infiltration from farmland that pollutes groundwater, plus more use of night-time irrigation to reduce evaporation.

I would like to outline some of the measures we take at Enzygo in a moment, and our advances in SUDS scheme verification. But first I think it will be useful to look briefly at what is happening globally and whether long-term drought patterns could be emerging.

The UK drought benchmark seems to be the long dry summer of 1976. For 15 consecutive days, temperatures somewhere in England reached 32.2°C. Foundations shrank and walls cracked. 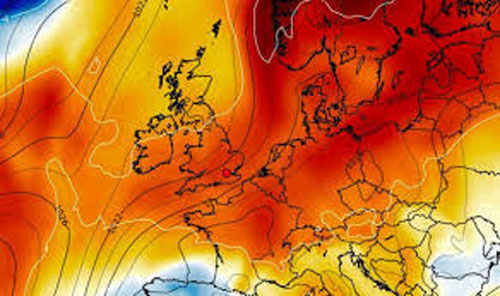 The current heatwave and 1976 have different causes, this year’s situation resulting from usual mid-Atlantic jet stream conditions rather than the preceding dry winter and summer in 1975. But climate scientists suspect links between global warming and the northerly or southerly track of high-altitude west-to-east jet stream winds in the northern hemisphere that determine the weather far below.

Does that mean that climate change is increasing the erratic frequency of modern droughts? There is a possibility, but not a certainty, that this year’s weather pattern will recur in the near future. However, globally dry conditions do seem to be increasing.

Australia’s current drought could be the worst for 400 to 800 years, a new study suggests. Global baseline water stress data shows that the US and South American Pacific seaboard, Morocco, Iran, India, Northern China, flood-hit Japan, plus southern and eastern Europe are also in trouble. Barcelona imported water by sea in 2008; some 70% of Spain’s crop irrigation water goes to waste.

Ironically, it is said that a massive sub-Sahara aquifer is not being exploited enough, while there are also warnings that the southern part of the huge Ogallala aquifer which waters the US prairies could run dry by 2050. Perhaps surprisingly, Afghanistan and Yemen improved water access between 2000 and 2015, from 27% to 63% and 43% to 70% respectively. That could change again.

NASA’s Gravity Recovery and Climate Experiment (GRACE), which detects changes in the Earth’s gravitational field linked to groundwater storage changes, recorded 108km3 of lost water from under northern India between 2002 and 2008. The dark side of China’s boom, not unlike California, is overuse of groundwater for cereal cultivation. Meanwhile, intense drought in the Tigris and Euphrates basins between 2006 and 2011 is blamed for the mass movement of people to cities that in turn is said to be a prime cause of the war in Syria. GRACE detected 19 hotspots in all.

In March, Cape Town narrowly escaped its draconian ‘zero day’ when the taps would have run dry. But other world cities listed with acute water supply problems include Beijing and London!

Water is heavy and can be expensive to move. The UK’s preferred approach to drought alleviation is joining contiguous water basins to allow natural flows, for example, between the Severn and the Thames.

As mentioned above, I think we can expect to see much wider use of sustainable drainage systems (SuDS) models that mimic nature by storing and purifying excess flood water in ditches, ponds and reedbeds, ready for its eventually returning underground via soakaways without ever leaving site boundaries.

SuDS were originally designed for developed urban settings where floodwater must not enter or affect adjacent properties. However, with more regular flooding events, SUDS is becoming increasingly relevant in rural settings as a cost-effective and efficient, low-maintenance water and groundwater management method. Remote flood-prone railway lines are a perfect example.

But there is a problem. The Environment Agency is responsible for ensuring that surface water courses maintain a consistent flow and quality, even under drought conditions. It also requires proof that water from SuDS is of sufficiently high-quality to be pumped back into key aquifers and is the licencing authority for any recharging through boreholes.

At Enzygo, our drainage engineers design SuDS schemes to control and manage water during flooding. At the same time, our planners and landscape specialists ensure that SuDS fit into the specific conditions of each individual development. Our ecologists make sure that SuDS provide and enhance habitats, and our geo-environmental engineers see that runoff quality is suitable for discharge to surface watercourses or groundwater. However, there is often a big difference between how a scheme is designed and how it is actually built.

Our teams have come across many schemes that have fallen well below standard in practice. To avoid this, we have invested heavily in the development of our own inspection and performance verification capabilities.

Keith Mobley’s third law – which suggests that it is important to go into the workplace and see what is actually happening if you want a system to work as it was originally intended – is as applicable to SuDS as it is to business management.

Inspection and validation services are increasingly required by local planning authorities as part of detailed SuDS schemes. Enzygo can provide Inspection services during pre-excavation, Quality Assurance services during construction, and final inspection. In this way, we can ensure that a scheme has been verified as meeting the agreed design and specification before it is handed over to the client or adopting organisation.

By working with scheme managers, we can also provide management support and water quality monitoring to ensure that schemes are performing as designed. In addition, we can provide remediation strategies for underperforming systems.

There is a fixed amount of water in the world. But much of it is inaccessible and unevenly distributed, particularly when population growth from 7.5 billion to 10 billion by 2050 is factored in. The World Bank says it would cost £21 billion annually up to 2030 to bring water and hygiene to those who need it – but create benefits worth $60 billion (£45 billion). At 0.1% of global GDP, that’s considerably less than the 2%, or 4%, suggested for defence spending! However, the Bank also predicts cities vulnerable to flooding will experience $1 trillion of damage without urgent action.

As climate scientists have predicted, areas prone to drought are getting drier and wet areas wetter. Coleridge’s The Rime of the Ancient Mariner describing a ship becalmed in the southern oceans talks of “Water, water, everywhere. And all the boards did shrink; Water, water, everywhere, Nor any drop to drink.”

The reality seems to be that some parts of the world will have ‘water, water everywhere’. Others will have ‘nor any drop to drink’. The answers have to be both strategic and local.

Please feel free to contact us if I can answer any questions in confidence.
matt.travis@enzygo.com and paul.hardwick@enzygo.com