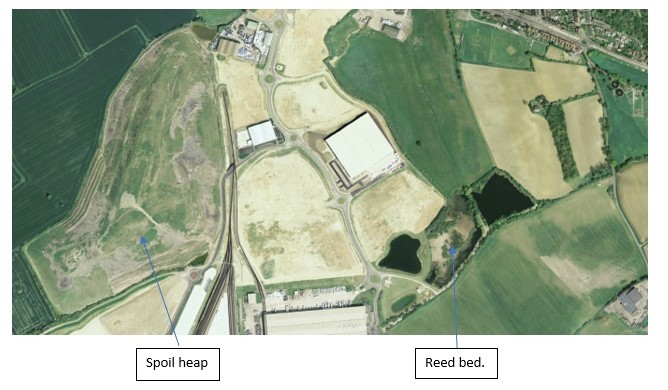 When coal was king, enormous spoil heaps scarred Britain’s landscapes from Kent and Wales to the Midlands, Durham and Scotland. Most have been hauled away and reused. Remediation to remove any latent risks standing in the way of regenerating valuable land is often the next priority.

As Director of Geoenvironmental, I want to explain our approach to this at Enzygo (www.enzygo.com) by referring to my MSc thesis on the subject, and its implications for two milestone case studies.

I should mention that the thesis title was “An assessment of the roles of reed beds in the remediation of contaminated surface water discharge from abandoned colliery in North Warwickshire” (2001), and both case studies were at Tamworth. 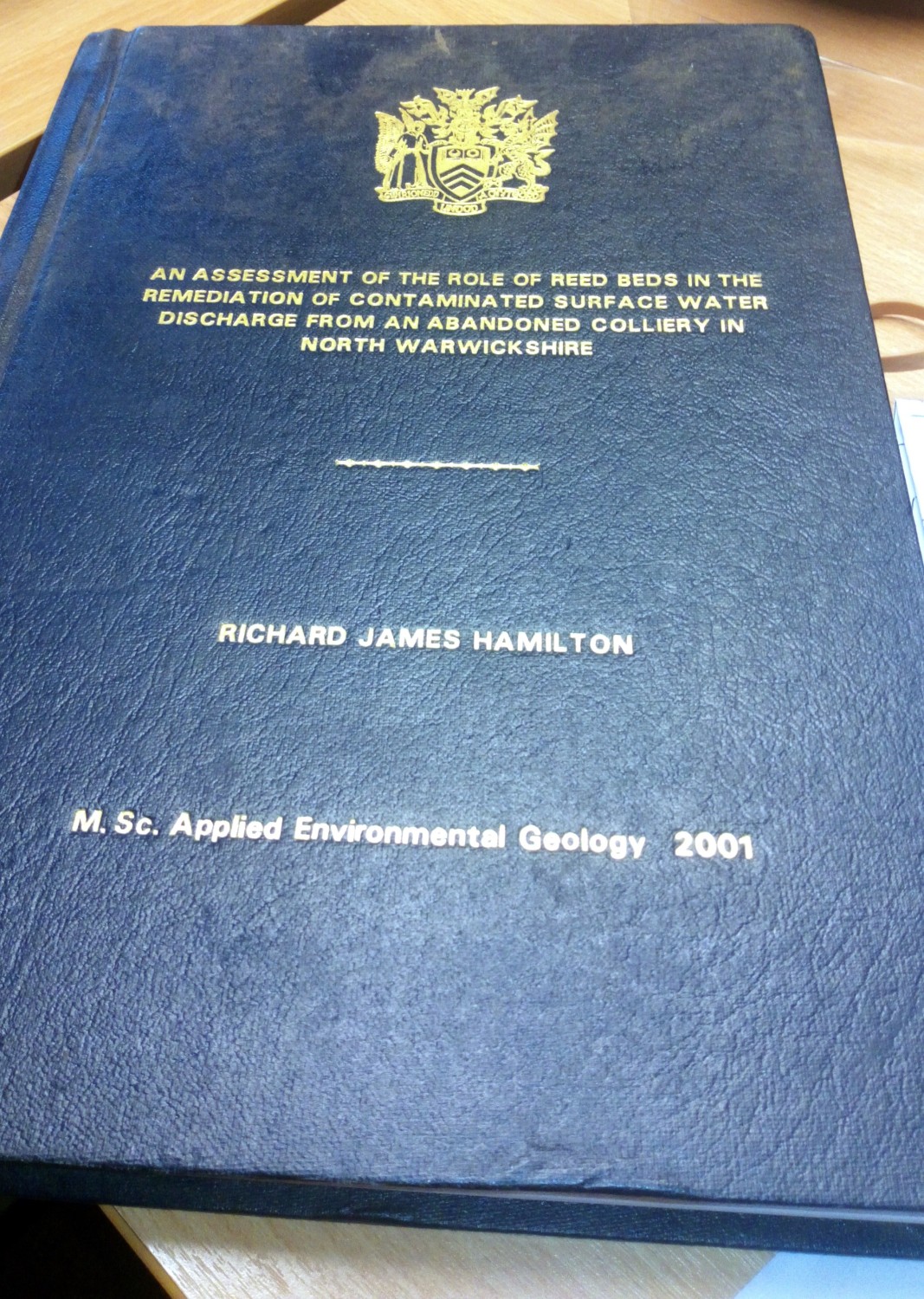 Coal is a taboo subject in the modern battle against climate change. However, not so long ago it was the fossil-fuel that powered industries and expanding economies.

Most of the unsightly sloping pyramids it left behind have now been hauled away with their millions of tonnes of waste material put to better well-controlled uses wherever possible.

But what happens to the problem sites left behind? Understanding how a once great but dirty industry operated, why unwanted stone, sand, clay and slag waste has to be removed with coal, where waste spoil was stored, and economics of its treatment, is crucial to the answer.

It is particularly important when mitigating the severe effects of water, chemical reactions, toxicity and gradient instability, and turning redundant lost sites into business and community assets with biodiverse environments.

Coal is formed by fossilised vegetation in extensive ancient swamps. In some part of the world it occurs in high seams that can be extracted with a ‘room and pillar’ checkerboard mining system.

Britain has mainly narrow, or low, seams that were once ‘hand got’ before mechanical longwall face cutting systems were introduced.

The aim is to extract an optimum seam thickness with maximum economic value, although narrow seams mean that neighbouring bands of sandstones, limestones and mudstones above and below must be mined too; waste also comes from cutting development headings and access roadways.

Inevitably sand, clay silt and grit got trapped in ancient swaps too, diluting the coal to a greater or lesser degree.

In open pit, or quarried coal mining, large volumes of overburden earth and rock must be removed to reach the coal beneath – and ensure slope stability. The deeper the pit – as an inverted cone – the more overburden has to be removed.

Historically, coal tips were close to pit heads to reduce haulage costs. Spoil was taken to the highest and most distant point of growing spoil heaps by cable cars or conveyers. They grew and grew, often with little real planning.

Loose material released at the top tumbled down to find its own slope stability angle. But space constraints over the years meant that further tipping deliberately exceeded safe repose angles.

Water, and controlled water flows, added to the risks. In 1963, a colliery spoil tip above the South Wales village of Aberfan collapsed and flowed down onto the community below, killing 144 including 116 children (https://www.bgs.ac.uk/case-studies/aberfan-1966-landslide-case-study/).

Waste or spoil heaps often hold a residual value that future technologies can perhaps exploit. Gold mine tailings, for example, contain important fractions of a gramme of ‘Au’ per tonne.

One Canadian source estimated that that country’s mining waste is worth $10 billion. Rio Tinto borate mining in the Mojave Desert has left behind circa 90 years’ worth of tailings.

By one estimate, the world’s total mining waste could be represented by cube some 6km high with a volume of 217.3km3 weighing 282.5 billion tonnes that grows by 12.3km3 annually (https://elements.visualcapitalist.com/visualizing-the-size-of-mine-tailings/). Some waste!

These are all very relevant to risk identification and control.

A series of risks

– Soil contaminants and surface water run-off – These can be environmental threats because nature and composition of some colliery spoil heaps creates unique concentrations of pollutants.

As a result, a number of technologies and models are used to provide long-term regulation and management.

– Fire – There is an additional risk that exothermic reactions which generate heat will make materials burn slowly underground, often for years.

Various tests based on calorific values quantify the heat that can be released from unit mass samples after complete combustion in excess oxygen.

In standard soils, these are around 1.7MJ/kg. Values below 2MJ/kg are unlikely to sustain smoldering; those above 10KJ/kg almost certainly will. The reference documentation is ICRL Guidance note 17/78 – Notes on the development and after-use of landfill sites.

– The ‘fire triangle’ – oxygen, heat and fuel – These are three key requirements. Where the fuel – coal or gas – is fully saturated by water, ignition will be prevented. But where fires cannot be extinguished, combustion will continue until the fuel source is completely exhausted.

The gas from colliery shale is not generally explosive. But in instances where tips have been built on top of organic materials, methane can be produced that may migrate into spoil above.

– Geotechnical risks – Mechanical and hydraulic forces can create risks. These are generally associated with: –

·       The physical structure of materials, i.e. whether loose material is simply tipped

·       The composition and soft nature of materials beneath spoil heaps

·       The height and slope angles of spoil can cause slope stability failure and contaminate surrounding land. 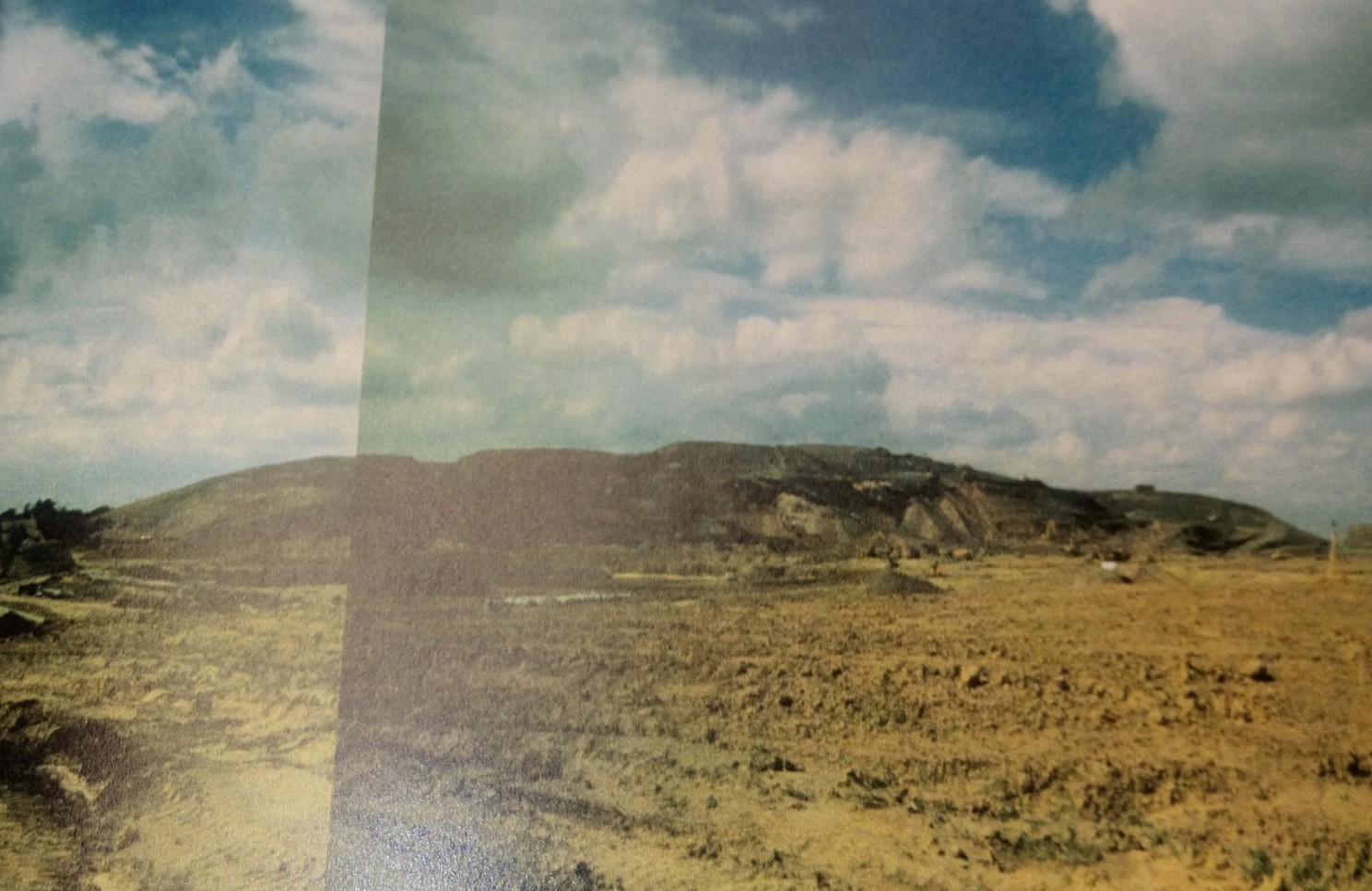 – Background – As described above, colliery spoil heap surface water run-off – or ‘acid mine drainage’ – needs substantial management before it can be discharged safely to the ground or water courses.

– Solution – In the Tamworth example, our aim was to contain two large spoil heaps. The first was formed of red shale as a by-product of the colliery process; the second had acid mine surface water run-off.

Run-off water was allowed to pass through three catchment pools. Here, large volumes of lime were added to precipitate some metals out of solution – and increase the pH value to more alkaline conditions.

After leaving these pools, the discharge water entered a reed bed system which absorbed and removed most heavy metals in its vegetation. The flow finally settled into two large ponds; the second which contained fish and also had a discharge point to a river.

Discharge only entered the first of the last two ponds during heavy rain when the reed bed was flooded out. However, because lime was added earlier, most metals settling out in the first pond.

– Analysis – This remediation scheme was monitored for three years where flow patterns, heavy metals absorption rates, and rainfall data were recorded. The conclusion was that all metals were being absorbed by the reed bed.

Because the reed bed was natural, its lifetime could not be estimated. However, the data indicated appropriately 10 years.

– Follow up – Nearly 20 years later, the reed bed was still removing all the heavy metals. If metal levels peaked, and a drop in the absorption rates suggested fully saturated reeds, an extra man-made reed bed was available to take over.

Separately, to improve surface water run-off management, drainage channels were installed. In parallel, an ecological assessment was made of microbial bugs that break down colliery spoil into soil-type materials which can support basic plants and provide some regeneration.

– Fungi helpers – Similarly, given the recent development of brownfield sites, plus contamination only found in spoil heaps, a fungi species unique to spoil heaps has been created. This work continues. 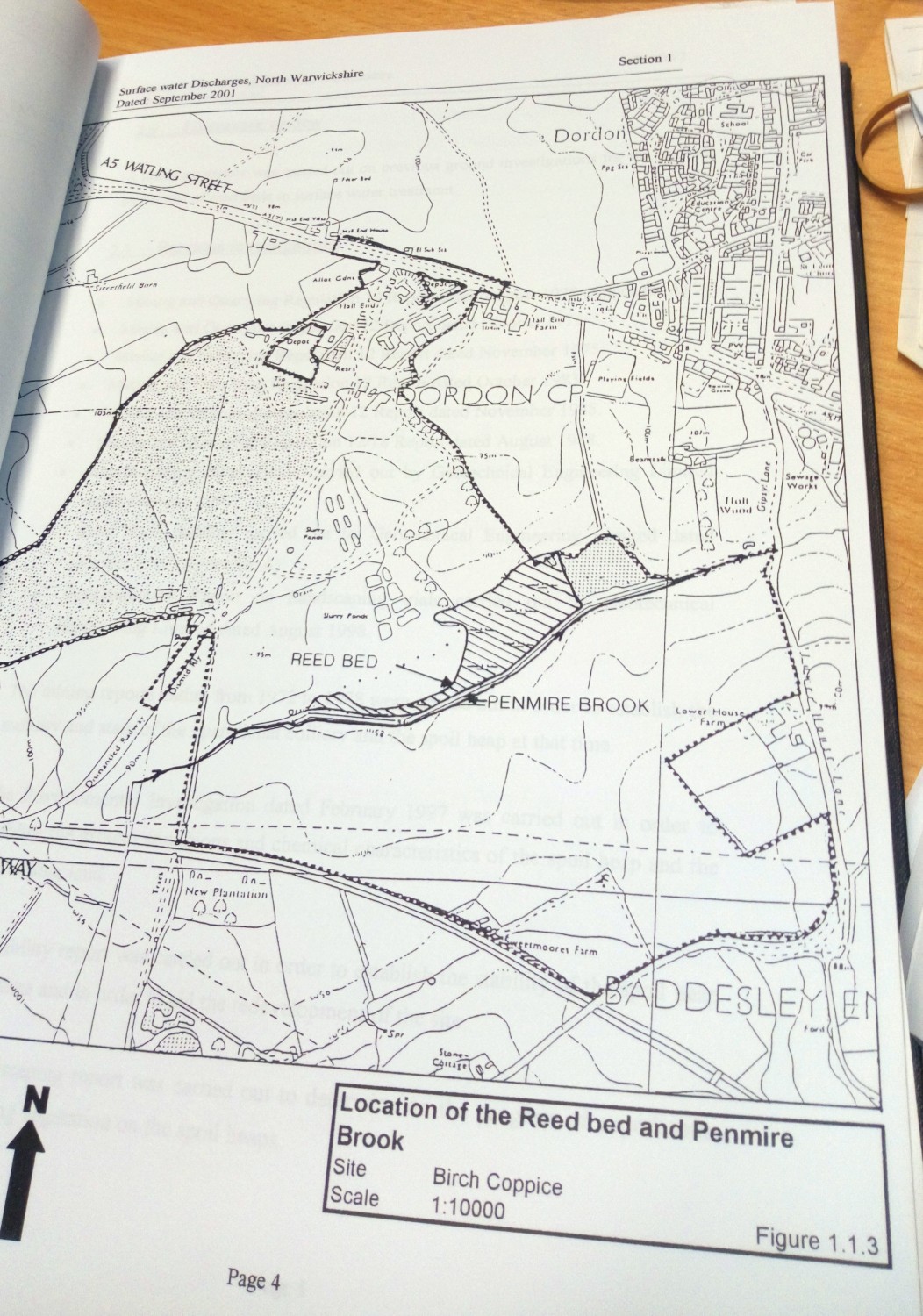 The technical data provided by the thesis was also used in the following two case studies.

– Background – The Coal Authority has conducted many investigations on the spoil heap known as Birch colliery Tip 10 as part of the requirements of M&Q (tips regulations 1972 to 1996).

They outlined underlying and subsequent ground conditions, plus slope stability, but included an assessment of the associated reed bed and surface water system.

– Layout – The site initially covered 62 acres. But a later 40m level rise increased its area to 79 acres of colliery spoil heaps with a maximum 53m height, five acres of reed beds and six acres of ponds.

– Geology – Underlying geology is Upper Carboniferous period coal measures of sandstone, mudstone and occasional limestone. No superficial materials were found. However within the red beds and ponds areas alluvium – loose soil or sediments such as clay, silt, sand, gravel carried in by flood or river waters – was noted up to 4m thick.

Coal workings were noted in five seams under the spoil heap; in 1972 it was noted that these should have stopped moving. The coal horizons included a four-foot seam, a seven-foot seam, and the double Top Beach and Bench seams, each with thickness of up to 1.70m at depths of 153m.

These seams were last worked in 1968. The maximum movement until 1996 was expected to be a settlement of up to 0.5m. However, after the 1960s substantial tension cracking and slumping was noted on spoil heap faces, leaving the site with a potential to slump into adjacent land.

– Operational history – The tipping onto the spoil heap started in the 1870s and was completed by 1986. However from the 1960s, washed colliery shale was added in various extensions to both the red shale and colliery spoil heaps. In the late 1960s and 1975 the spoil heap was also shown to be burning and was controlled by adding an inert cover to stop oxygen entering.

– Chemical analysis – Undertaken as part of the remediation programme and the thesis, this identified elevated concentrations of iron, aluminium, nickel and zinc.

– Treatment – Acidic and contaminated run off was circulated through balancing ponds and lagoons with lime added, and continued through a natural reed bed and ponds before discharge to a river.

– Results – The combined results of testing from the balancing ponds, reed beds and final ponds indicated that a pH level rise from pH2 at the spoil heaps to pH6 at the reed beds allowing the precipitation and then absorption of metals by the reed bed; an 85% to 95% reduction in nickel and zinc concentrations was seen between inlet and outlet measurements.

The only exception was recorded when two heavy rainfall events flooded the reed bed. However, the contaminants were still captured in the first pond.

Overall the conclusion was that the reed bed successfully neutralised acid mining surface water seeping from the spoil heaps when combined into a surface water system which let the pH rise from pH2 to pH6 before entering the reed bed.

These findings are extremely practical and I hope to show in the near future how they are used very effectively on land remediation and reclamation projects in the South Wales Coal Field.

Please feel free to contact me directly for more information, or to discuss any of the issues above.