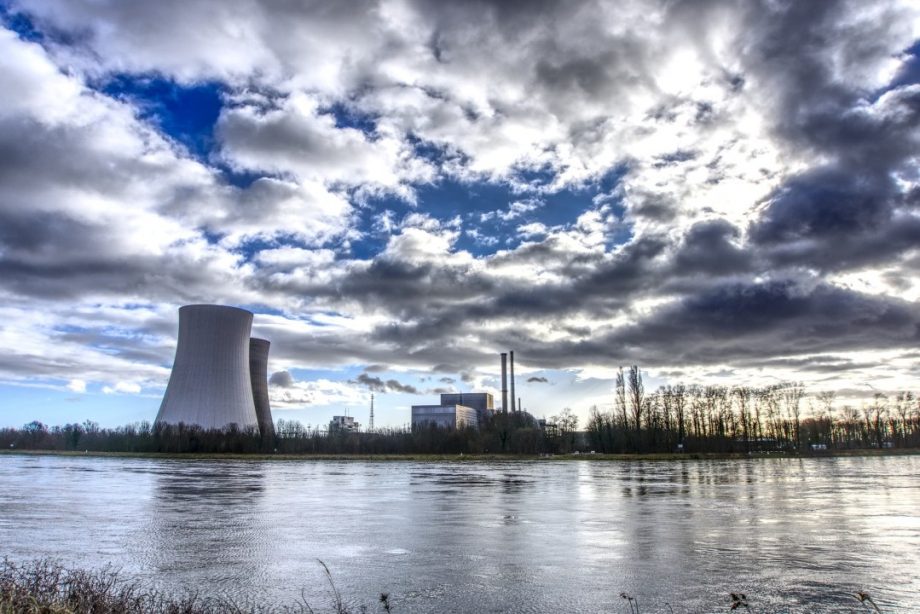 Nuclear plant flood threats … and the value of site screening

Rising sea levels could flood nuclear reactors around the world with catastrophic consequences, some experts warn. Fortunately, our site screening skills can identify dangers and opportunities at an early planning stage on projects of all sizes to avoid the worst impacts and minimise others.

And size is important to the economy. At the large end, to decarbonise the UK strategically the Government wants to start building up to eight new nuclear power stations on coastal sites by 2030.

However, thousands of ordinary client and community projects also need to be climate change-proofed for the years ahead as global warming increases its grip.

Small local developments may not face the same devastating damage. But commercial risks and potential losses from increasing high-impact weather events, and flooding in particular, are no less important.

This raises the question of how well do you know your site – not only under present and projected conditions, but also under unprecedented rates of climate change? 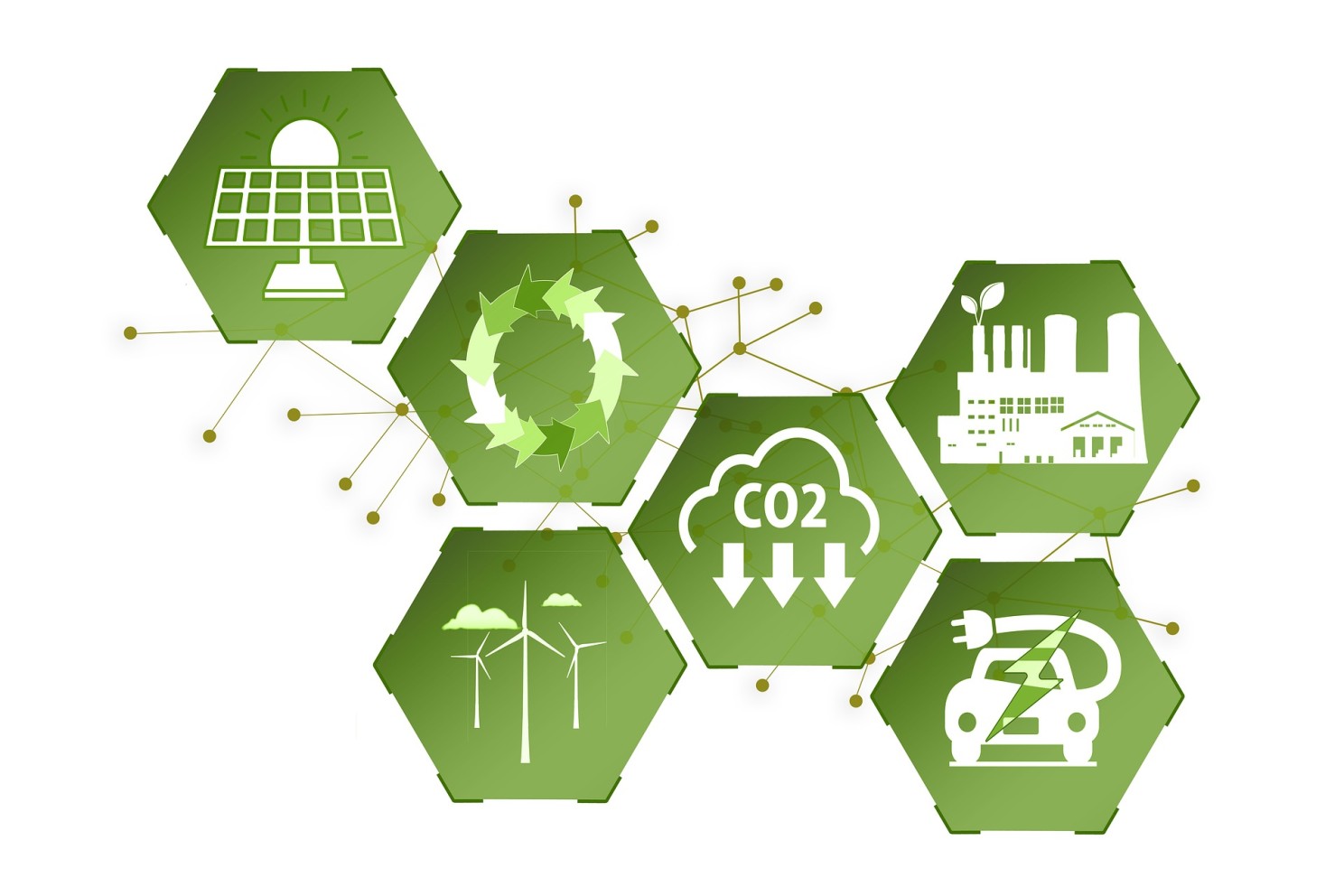 In March 2022, the Government’s new energy strategy promised to source 95% of UK electricity from low-carbon wind, hydrogen, and solar sources. It also proposed to build a series of new nuclear plants after “decades of underinvestment” so the UK can “lead the world once gain”.

There are also proposals for Bradwell B at Bradwell-on-Sea (Essex), Moorside (Cumbria), and Oldbury (Gloucestershire).

Factory-made small modular reactors (SMRs) could also make their debut. Rolls Royce wants 15 online by 2030, each costing £2 billion. Trawsfynydd and Wylfa (Wales) are tipped as early sites. One vision is for most cities to eventually have their own local SMR.

A new body – Great British Nuclear – will deliver the strategy. The overall aim is for 24GW – or 25% of projected UK electrical demand – to come from nuclear sources by 2050. 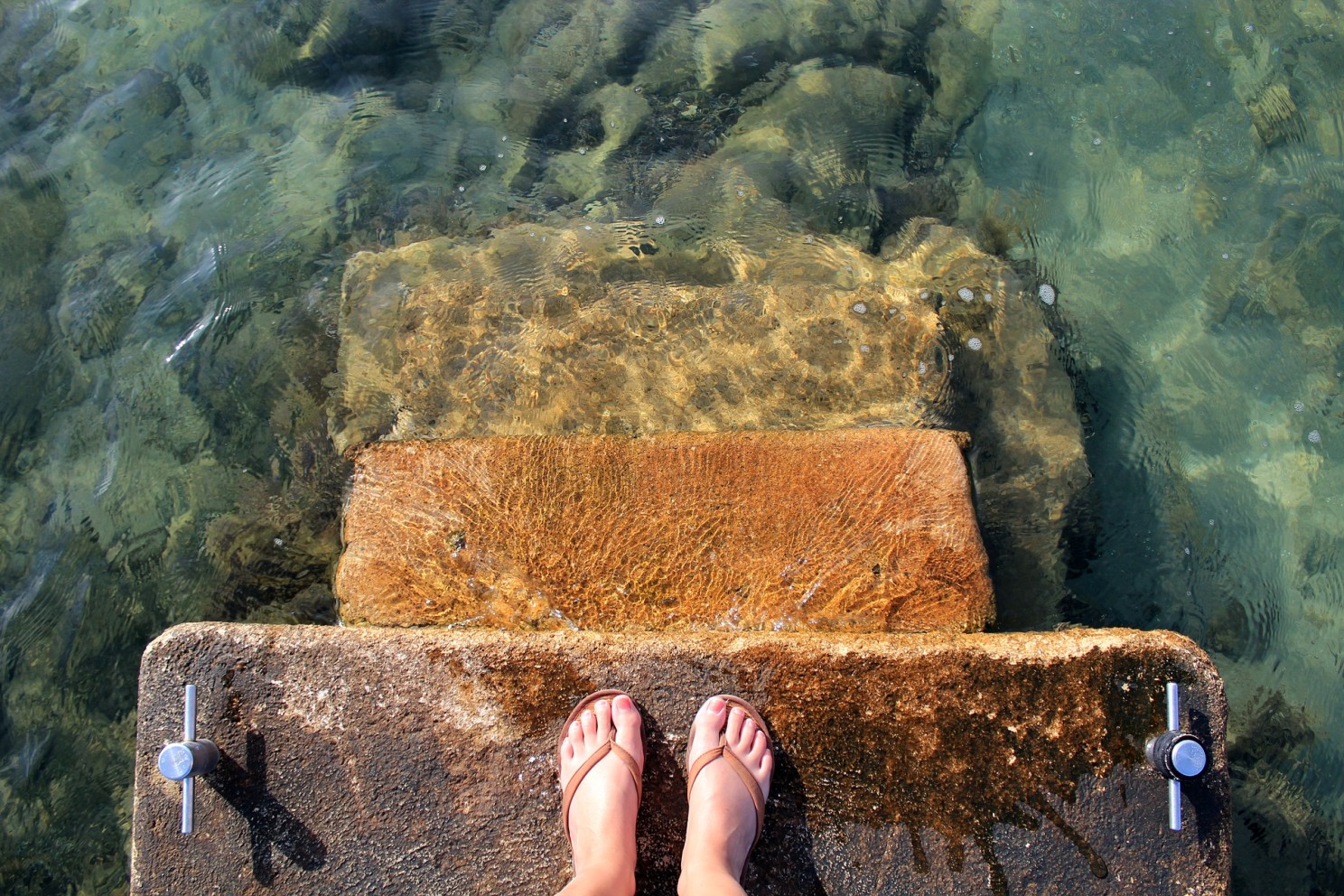 However, the nuclear conundrum is ironic. Many countries are planning to construct a new generation of nuclear power stations because they are in theory mostly carbon-free.

The twist is that if climate change gets there first, there are now anxieties in some influential quarters that reactors could be swamped by the end of this century as the sea creeps slowly inland.

Greenpeace and other expert sources warn that much faster than expected rising sea levels could tip the race in favour of flooding, making all current and proposed nuclear power station sites unsafe.

As Greenpeace UK’s chief scientist Dr Doug Parr explains, all thermal power stations need water. But he adds, “With extreme events that are rare today becoming the norm in the future, existing risk mitigation measures become obsolete and coastal nuclear installations will be at significant risk.”

The industry’s response is that all new, proposed, and existing nuclear plants will end their operating lives and be decommissioned safely before unavoidable “baked in” sea level rises are a threat.

Hopefully, this view will be the right one if, in a worst case scenario, resistance measures built into projects at the design stage create the time envelope needed to manage out negative conditions. 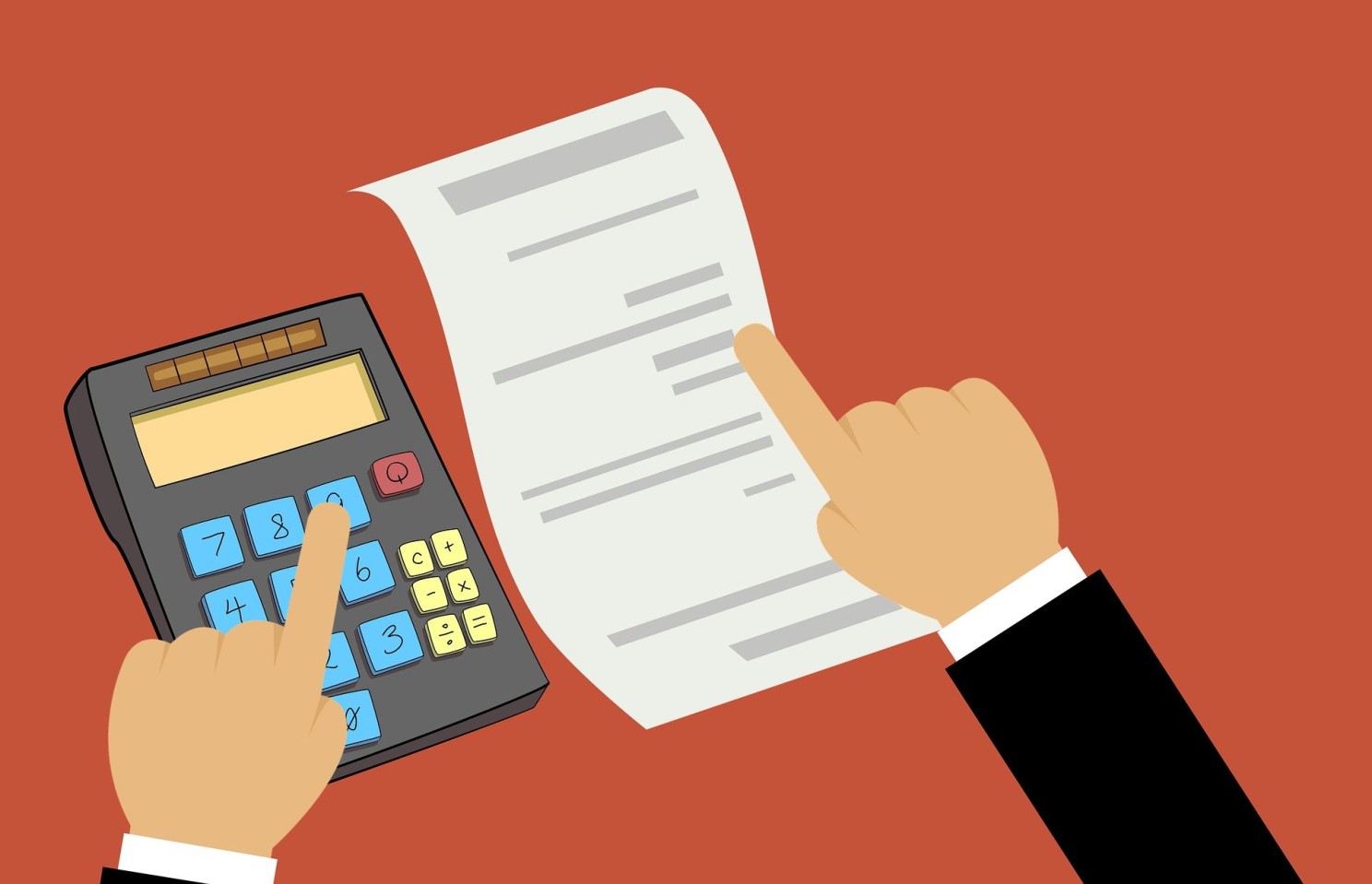 Meanwhile, the cost of decommissioning the UK’s seven ageing nuclear power stations has nearly doubled to £23.5 billion and is likely to rise further, according to the public accounts committee.

Another setback is that Hinkley Point C in Somerset will cost extra £3 billion and begin to operate in 2027, a year later than planned, because of Covid-19.

And a final decision on Sizewell C in Suffolk could be delayed until summer 2022 due to what campaigners describe as “really difficult problems”; East Suffolk Council and Suffolk County Council have also raised objections on the basis that sea defences will be inadequate.

An early starting point is our site screening service which avoids unwelcome and costly surprises caused by a lack of knowledge, analysis or interpretation. We do this by identifying all opportunities, risks, and optimal solutions.

I am grateful to my colleague Millie Croft for compiling the example summaries below. As the links show, we consider many factors in addition to flooding and sea level rises, including heritage, amenities, landscape and ecology.

However, in this instance she has focused in on potential problems and mitigation measures at a selection of the UK’s proposed nuclear sites where unwanted water could be a problem.

Enzygo’s Environmental Impact Assessments are important in terms of screening and our Site Appraisal service considers a comprehensive range of different land use options.

To avoid pitfalls, our Local Plan Representation & Research also identifies planning policies that must be met rigorously. These are presented in a Site Appraisal document.

Planning for known and unknown unknowns

However, the World Nuclear Association says climate change impacts were accounted for before and after Fukushima and sees them as future rather than present risks with a very long timeline.

On the water’s edge

Many plants are built by the sea because nuclear stations need large volumes of water to cool their reactors, Hinkley Point on the Somerset coast is an example.

The counter view is that because the Hinkley Point C planning appraisal in 2012 predated a proper understanding of Greenland ice cap and Antarctica melting, the new seawall does not account adequately for sea-level rises and heavy erosion.

A matter of timing

Projected sea level rises have gone up from less than 30cm to more than 1.0m within the plant’s operating and decommissioning life.

The International Atomic Energy Authority (IAEA – https://www.iaea.org/) advised operators in 2011 to only “take into account” an 18cm to 59cm rise by 2100, based on a 2007 Intergovernmental Panel on Climate Change (IPCC) assessment.

This has been comprehensively passed since, putting nuclear stations on the climate change front line “figuratively and literally”. The National Ocean Service 2022 report (https://oceanservice.noaa.gov/hazards/sealevelrise/sealevelrise-tech-report.html) projects an average US rise of 0.25m to 0.30m just by 2050; this is equal to the 1920 to 2020 rise.

The Enzygo examples seen here can be examined in full here (Enzygo Documents – Enzygo) and focus on flooding and sea level rise risks.

However, they also consolidate a great deal of essential information and show how we begin to identify important site constraints, plus key landscape visual impact and ecology features. Land that falls below annual flood levels can be at risk. 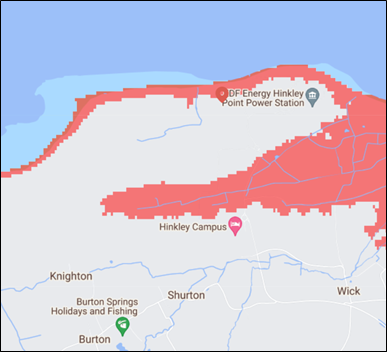 Flood risk – The new site mainly in Flood Zone 1 has a low flood risk from rivers and the sea; its northern boundary in “Flood Zone 3: Areas benefitting from flood defences” has a high risk. Defences east of the site skirt the northern Hinkley Point A and B boundary. Land to the south and east is in Flood Zone 3.

Sea level rise – Climate Central Sea Level Rise and Coastal Flood Map (CCSLRCFM) data shows that the northern boundary and land to the south will be below the annual flood level by 2030; the site itself is not included in this projection. 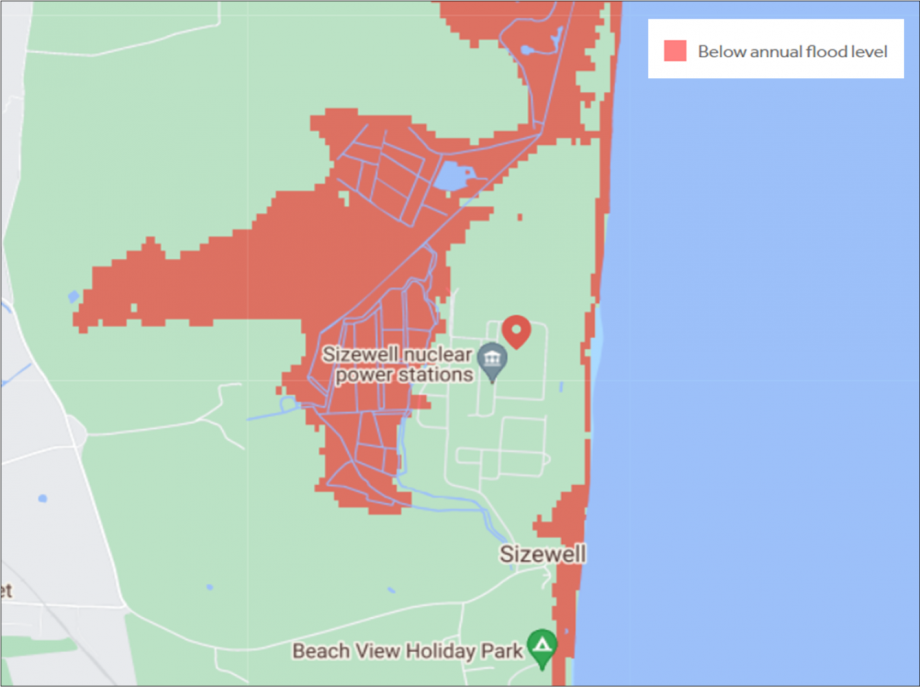 The site at IP16 4UR near the fishing hamlet of Sizewell stands next to the existing Sizewell A and Sizewell B stations.

Flood risk – Falling mainly in Flood Zone 3, this site has a high probability of flooding. The immediate area to the north and west are also in Flood Zone 3. However, the existing Sizewell A and Sizewell B power plants are in Flood Zone 1.

Sea level rise – A desktop review forecasts that the coastline to the east of the site will fall below the annual flood level and be at risk from 2030 onwards. CCSLRCFM data confirms this to be the case. 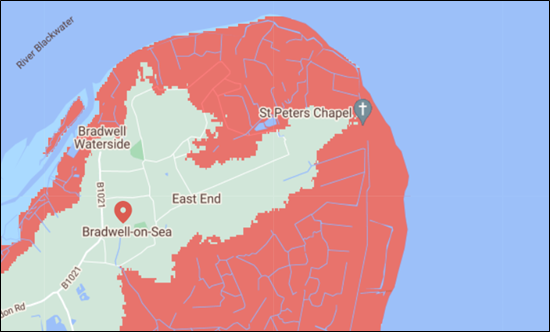 The existing decommissioned Bradwell power station at CM0 7HP is west of the proposed site.

Flood risk – This site is predominantly within Flood Zone 3. An existing flood embankment runs around the northern and eastern boundaries. Weymark’s River to the southwest has a low flood risk; the area is between 0.1% and 1%. The proposal must be supported by a Flood Risk Assessment.

Sea level rise – A desktop study shows that the coastline east of the site will be at flood risk from 2030. CCSLRCFM data suggests the site and surrounding area to the east will lie lower than the annual flood level by 2030. 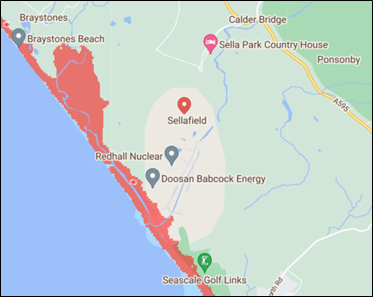 The Moorside site at CA20 1DS is near the existing Sellafield power station.

Sea level rise – Again, a desktop review shows the coastline by the proposed Moorside site faces a flood risk from 2030. CCSLRCFM data indicates the coastline west of the site will be below the annual flood level by 2030. 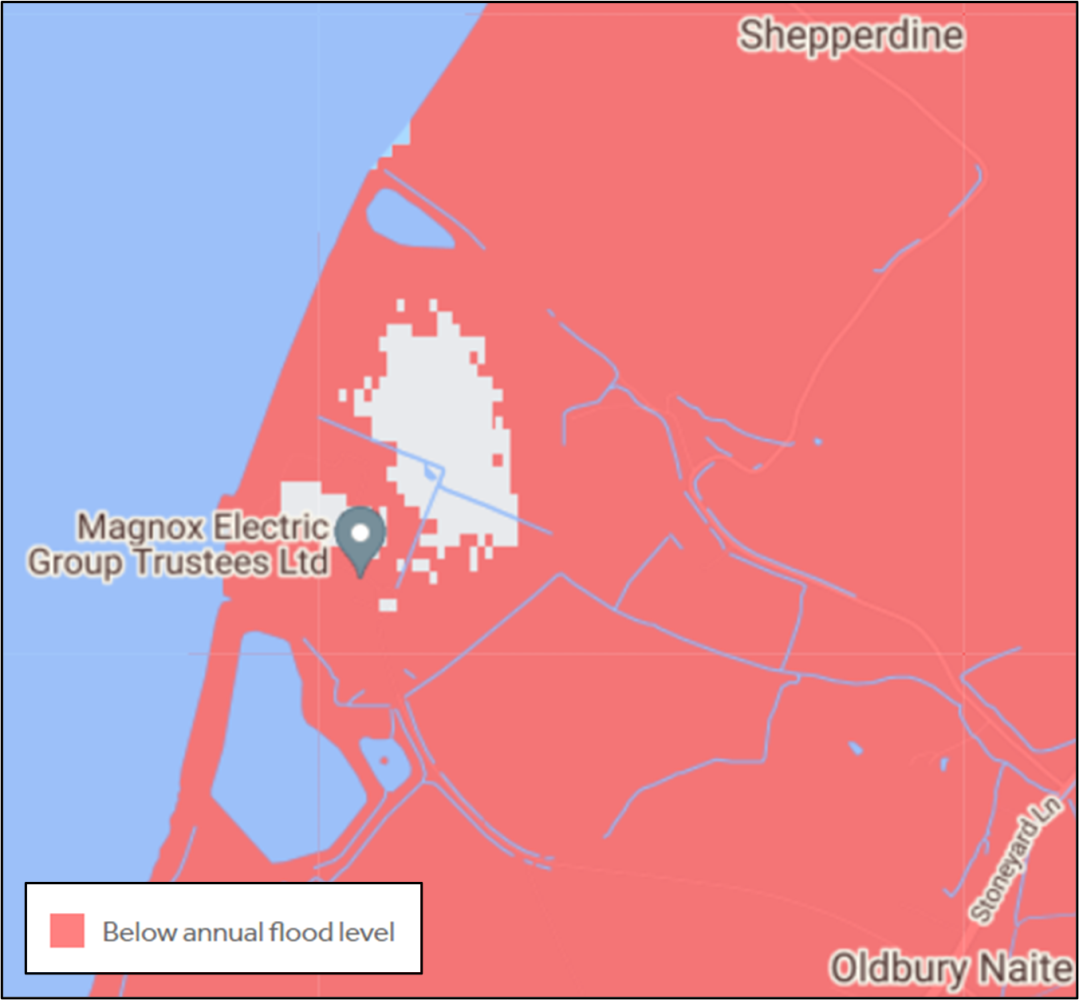 Oldbury B at BS35 1RQ on the eastern bank of the Severn Estuary is next to the existing ‘Oldbury Nuclear Power Station’.

Flood risk – The site in Flood Zone 3 has a high flooding risk. Defences reduce but do not remove this. No major watercourses cross the site; the Severn skirts its northern boundary. The area is at very low flood risk from rivers, the sea and surface water.

Sea level rise – The desktop review shows the site will be below annual flood level by 2030. CCSLRCFM data confirms most of the proposed site and surrounding area are below this level, indicating that the impact of local rising sea levels will be severe.

As always, please contact me directly to discuss any of the issue above.